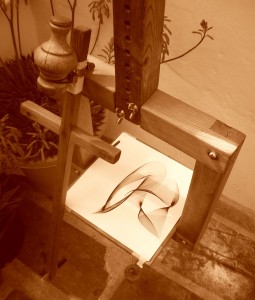 In 1995, whilst visiting the mathematics department of the Science Museum in London, I came across a device known as the ‘twin-elliptic harmonograph’, invented in 1844 by a professor Blackburn. I constructed my own harmonograph, and have spent many years exploring it’s properties. It consists of two lead weights suspended on a single pendulum – the weights are finely tuned, so when they move in relation to one another they create very complex graphic images. The pen which traces the movement of the pendulum is set at the exact focal point between the two weights, and the weights & dimensions can be altered  to create different styles of image. Like finger-prints, no two harmonographs are the same.